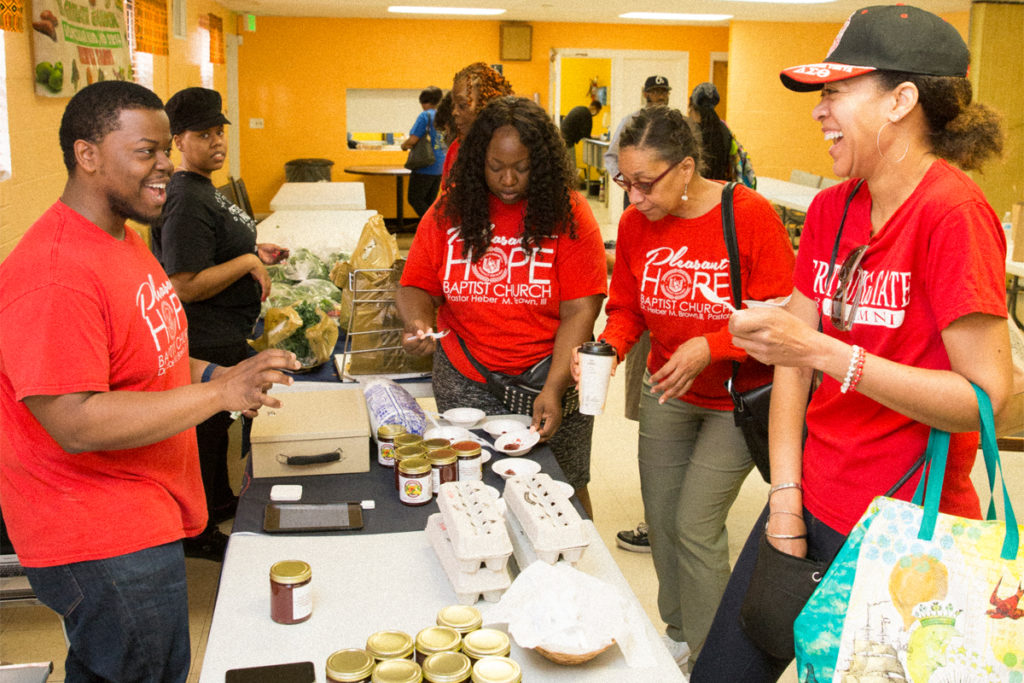 On a warm weekend in early May, Reverend Heber Brown of Pleasant Hope Baptist Church in Baltimore led a delegation of his members on a tour of Browntown Farms in Warfield, Virginia and the Coalition for Healthier Eating food hub in Bethel, North Carolina. For Brown, the founder of the Black Church Food Security Network (BCFSN), the day trip was a concrete step toward solidifying strong relationships between Black residents of East Coast cities and Black farmers in the rural south.

“We explored how we can help one another, as we’re impacted by food inequity in similar and distinct ways,” says Brown.

The ultimate goal is to build a sustainable, community-centered food system anchored by Black churches and Black food producers and led by those most directly affected by economic inequity. In both places, access to healthy, fresh, affordable food can be challenging due to what Brown and other activists call “food apartheid.”

“We feel that apolitical and ‘color-blind’ approaches to addressing food inequity fly in the face of the statistics, which clearly show that Black people are disproportionately impacted in a negative way by food apartheid, environmental racism, and discrimination in planning and public policy,” says Brown. “To ignore these realities in [so-called] food justice work is a gross miscalculation at best.”

The network provides guidance and ongoing support for people starting gardens on church-owned lands, finding and screening volunteers for those gardens, establishing pop-up produce stands before and after-church services in the Baltimore metro area, and connecting with Black farmers to stock those stands.

In this way, BCFSN operates outside of the charity model. Instead, it calls itself a “self-help” organization, intent on challenging what Brown describes as “the harmful and dehumanizing dynamics of initiatives that make it almost a requirement to be in a posture of subservience and dependence on the benevolence of those who have the resources.”

Since 2015, BCFSN has expanded to include 10 churches across greater Baltimore and five Black-owned farms in Baltimore, North Carolina, and Virginia. This year, as interest grows, it’s on track to double those numbers and expand the network into Washington, D.C. and Maryland’s Eastern Shore.

A Garden and an Uprising

BCFSN began with a garden and an uprising. Seven years ago, Brown, now 37, was a new pastor at Pleasant Hope Baptist Church. One day, as he was walking toward the church, contemplating how to help members of his congregation who had ended up in the hospital for diet-related problems, he had a vision of the front yard lawn transformed into a vegetable garden.